On a UITableViewCell constructor:

What is the reuseIdentifier used for?

The reuseIdentifier is used to indicate that a cell can be re-used in a UITableView. For example when the cell looks the same, but has different content. The UITableView will maintain an internal cache of UITableViewCell’s with the reuseIdentifier and allow them to be re-used when dequeueReusableCellWithIdentifier: is called. By re-using table cell’s the scroll performance of the tableview is better because new views do not need to be created.

Explain the difference between atomic and nonatomic synthesized properties?

Atomic and non-atomic refers to whether the setters/getters for a property will atomically read and write values to the property. When the atomic keyword is used on a property, any access to it will be “synchronized”. Therefore a call to the getter will be guaranteed to return a valid value, however this does come with a small performance penalty. Hence in some situations nonatomic is used to provide faster access to a property, but there is a chance of a race condition causing the property to be nil under rare circumstances (when a value is being set from another thread and the old value was released from memory but the new value hasn’t yet been fully assigned to the location in memory for the property).

Explain the difference between copy and retain?

Want to ace your technical interview? Schedule a Technical Interview Practice Session with an expert now!

What is method swizzling in Objective C and why would you use it?

Method swizzling allows the implementation of an existing selector to be switched at runtime for a different implementation in a classes dispatch table. Swizzling allows you to write code that can be executed before and/or after the original method. For example perhaps to track the time method execution took, or to insert log statements

What is a category and when is it used?

Can you spot the bug in the following code and suggest how to fix it:

What is the difference between viewDidLoad and viewDidAppear?
Which should you use to load data from a remote server to display in the view?

viewDidLoad is called when the view is loaded, whether from a Xib file, storyboard or programmatically created in loadView. viewDidAppear is called every time the view is presented on the device. Which to use depends on the use case for your data. If the data is fairly static and not likely to change then it can be loaded in viewDidLoad and cached. However if the data changes regularly then using viewDidAppear to load it is better. In both situations, the data should be loaded asynchronously on a background thread to avoid blocking the UI.

What considerations do you need when writing a UITableViewController which shows images downloaded from a remote server?

This is a very common task in iOS and a good answer here can cover a whole host of knowledge. The important piece of information in the question is that the images are hosted remotely and they may take time to download, therefore when it asks for “considerations”, you should be talking about:

Other good answers will go on to talk about offline caching of the images, using placeholder images while the images are being downloaded.

What is a protocol, and how do you define your own and when is it used?

A protocol is similar to an interface from Java. It defines a list of required and optional methods that a class must/can implement if it adopts the protocol. Any class can implement a protocol and other classes can then send messages to that class based on the protocol methods without it knowing the type of the class.

A common use case is providing a DataSource for UITableView or UICollectionView.

What is KVC and KVO? Give an example of using KVC to set a value.

KVC stands for Key-Value Coding. It’s a mechanism by which an object’s properties can be accessed using string’s at runtime rather than having to statically know the property names at development time. KVO stands for Key-Value Observing and allows a controller or class to observe changes to a property value.

Let’s say there is a property name on a class:

And we can modify it’s value by sending it the message:

What are blocks and how are they used?

Blocks are a way of defining a single task or unit of behavior without having to write an entire Objective-C class. Under the covers Blocks are still Objective C objects. They are a language level feature that allow programming techniques like lambdas and closures to be supported in Objective-C. Creating a block is done using the ^ { } syntax:

It is essentially a function pointer which also has a signature that can be used to enforce type safety at compile and runtime. For example you can pass a block with a specific signature to a method like so:

If you wanted the block to be given some data you can change the signature to include them:

What mechanisms does iOS provide to support multi-threading?

What is the Responder Chain?

If you get the opportunity to draw this one out, it’s worth doing to impress the interviewer: 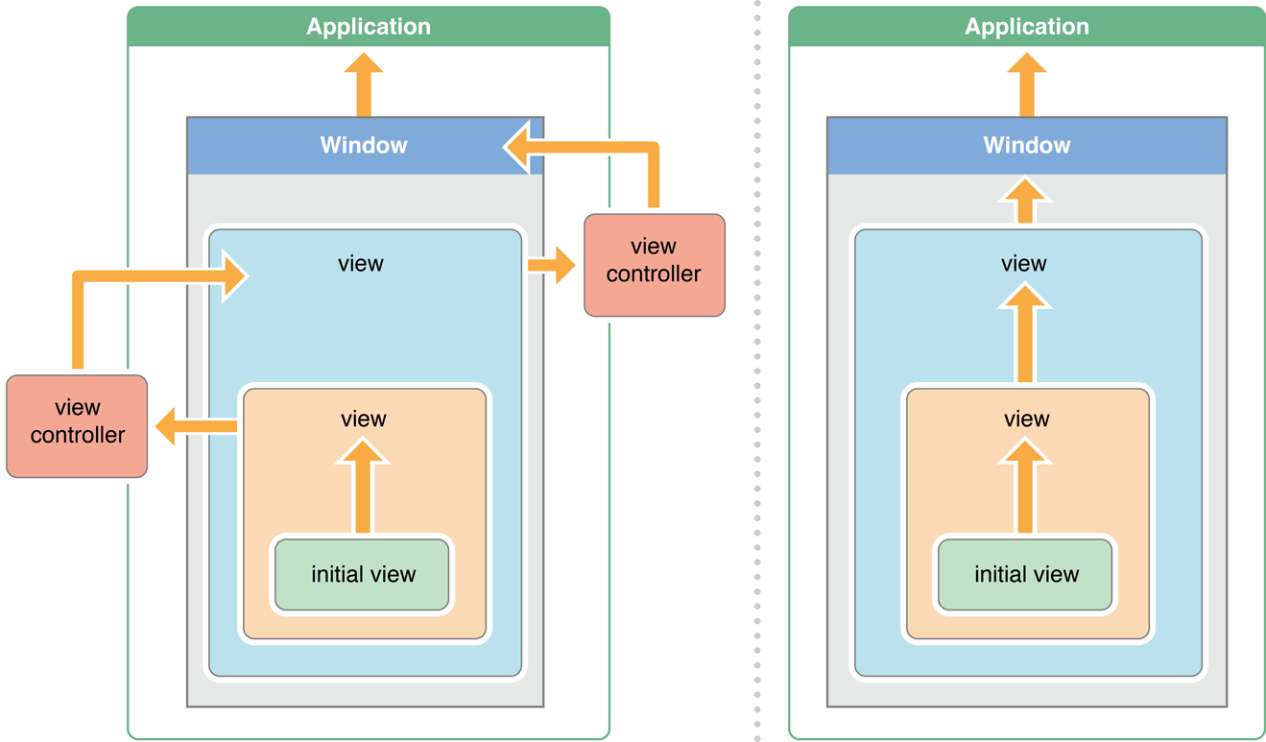 What’s the difference between using a delegate and notification?

Both are used for sending values and messages to interested parties. A delegate is for one-to-one communication and is a pattern promoted by Apple. In delegation the class raising events will have a property for the delegate and will typically expect it to implement some protocol. The delegating class can then call the _delegate_s protocol methods.

Notification allows a class to broadcast events across the entire application to any interested parties. The broadcasting class doesn’t need to know anything about the listeners for this event, therefore notification is very useful in helping to decouple components in an application.

There’s no right or wrong answer to this, but it’s great way of seeing if you understand the benefits and challenges with each approach. Here’s the common answers I hear:

Most developers will propose a combination of all 3 where it makes sense to share code, then re-usable UIViews or Xib files.

How would you securely store private user data offline on a device? What other security best practices should be taken?

Again there is no right answer to this, but it’s a great way to see how much a person has dug into iOS security. If you’re interviewing with a bank I’d almost definitely expect someone to know something about it, but all companies need to take security seriously, so here’s the ideal list of topics I’d expect to hear in an answer:

Other security best practices are:

What is MVC and how is it implemented in iOS?
What are some pitfalls you’ve experienced with it? Are there any alternatives to MVC?

MVC stands for Model, View, Controller. It is a design pattern that defines how to separate out logic when implementing user interfaces. In iOS, Apple provides UIView as a base class for all _View_s, UIViewController is provided to support the Controller which can listen to events in a View and update the View when data changes. The Model represents data in an application and can be implemented using any NSObject, including data collections like NSArray and NSDictionary.

Some of the pitfalls that people hit are bloated UIViewController and not separating out code into classes beyond the MVC format. I’d highly recommend reading up on some solutions to this:

In terms of alternatives, this is pretty open ended. The most common alternative is MVVM using ReactiveCocoa, but others include VIPER and using Functional Reactive code.

A product manager in your company reports that the application is crashing. What do you do?

This is a great question in any programming language and is really designed to see how you problem solve. You’re not given much information, but some interviews will slip you more details of the issue as you go along. Start simple:

Once you can reproduce it or have more information then start using tooling. Let’s say it crashes because of a memory leak, I’d expect to see someone suggest using Instruments leak tool. A really impressive candidate would start talking about writing a unit test that reproduces the issue and debugging through it.

Other variations of this question include slow UI or the application freezing. Again the idea is to see how you problem solve, what tools do you know about that would help and do you know how to use them correctly.

What is AutoLayout? What does it mean when a constraint is “broken” by iOS?

AutoLayout is way of laying out UIViews using a set of constraints that specify the location and size based relative to other views or based on explicit values. AutoLayout makes it easier to design screens that resize and layout out their components better based on the size and orientation of a screen. _Constraint_s include:

Sometimes constraints conflict with each other. For example imagine a UIView which has 2 height constraints: one says make the UIView 200px high, and the second says make the height twice the height of a button. If the iOS runtime can not satisfy both of these constraints then it has to pick only one. The other is then reported as being “broken” by iOS.